Skip to content
ince the pandemic upended the economy, drivers have found new work outside large fleets. Though large for-hire carriers have a smaller labor pool from which to hire, smaller carriers might only survive while spot markets are high.

The Great Truck Driver Shortage of 2021 is a popular topic in mainstream news this fall. It’s low-hanging fruit for national and local reporters to point to as the cause of the supply chain problems plaguing the U.S. But is it that simple?

“The total supply of drivers might not be quite as tight as it might seem from news reports and anecdotal comments that you’ve maybe heard,” said Avery Vise, VP of trucking for FTR Transportation Intelligence. “Productivity remains very disruptive, as evidenced by the very strong summer. Put another way: It’s not so much that we don’t have enough drivers—it’s that they’re not where they need to be.”

Since the pandemic began, more drivers have moved to smaller carriers or found jobs in the final-mile delivery segment, similar to heavy-duty trucking but with less federal oversight and potentially more flexible work schedules.

Vise notes that he is not saying there isn’t a driver shortage—“we probably don’t have quite enough drivers”—but no one has “real-time data on the number of drivers at any given moment.” Based on current and forecasted trucking rate increases, driver utilization is nearly as high as it can be. 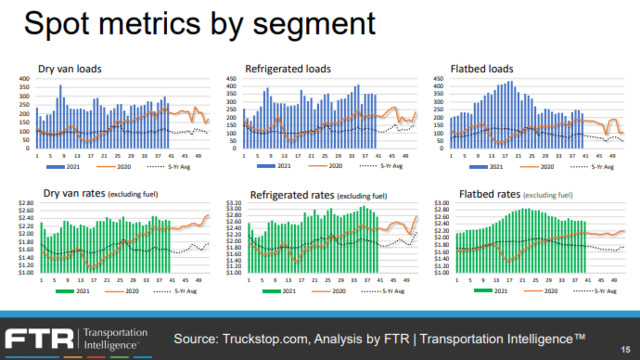 All three major trucking segments—dry van, reefer, and flatbed—are forecast to see 18% to 19% rate increases this year, compared to 2020, according to FTR analysis. Those numbers exclude fuel and are split between contract (70%) and spot (30%) rates.

That significant increase this year, Vise said, is “principally because spot rates, excluding fuel, look to be up 25 to 30%. Contract rates aren’t exactly weak, either, with a forecast up 13% over 2020. For next year, we see rates basically holding steady with a 4% gain in contract rates, offsetting a decline in spot rates of more than 5%.”

FTR is expecting more strength in flatbed rates in 2022 than dry and reefer.

How does FTR make these forecasts? “At the most basic level, it’s adjusting current rates by the forecast of active capacity utilization,” Vise explained. “In other words, the degree to which trucks that have drivers are filled with freight. Essentially, active truck utilization is a function of driver demand, driver supply, and the productivity of trucks and drivers.”

After some volatility last winter, Vise said FTR estimated utilization was “maxed out” most of 2021. “We really expect only incremental relief through next year,” he added. “We expect that utilization will remain above 97% until, perhaps, the very end of next year.”

While “freight demand remains solid” in 2021, it’s not “much stronger than it was before the pandemic,” Vise said. “So what’s driving active-truck utilization? It’s driver capacity and productivity—or rather lack thereof.” 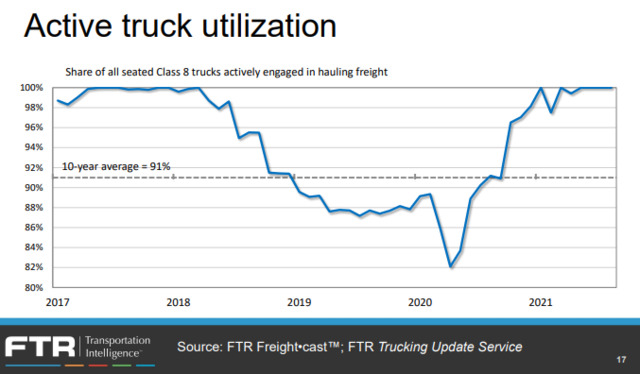 High turnover is part of the trucking industry

FTR uses modeling to estimate how many Class A commercial drivers are active. Those estimates come from various metrics that all have their limitations. One metric is trucking payroll data, which only includes for-hire truckers. And that payroll employment category is made up of more than just drivers. “However, on the latter point, I think we can assume that changes month-to-month principally relate to the driver supply since drivers are the largest and most variable occupation in the trucking workforce,” Vise said. 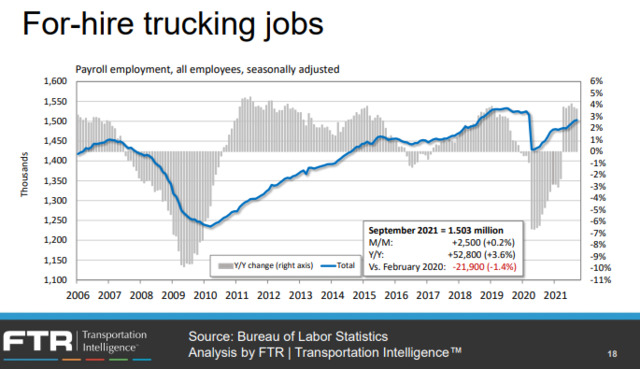 After the U.S. economy and trucking industry made a strong recovery from the pandemic late last year, trucking hiring flattened out through the first five months of 2021, Vise said. “The summer months were stronger but not especially robust,” he added. “In September, when local delivery and warehousing posted strong gains, trucking employment was up by just 2,500 payroll jobs seasonally adjusted.”

Vise said there seems to be little correlation between payroll employment changes and the strength of hiring activity.

Another metric that FTR monitors for driver data is the federal Drug & Alcohol Clearinghouse, which, since 2020, carriers must contact for pre-employment queries. This shows how many drivers fleets are trying to hire, Vise noted. “The job growth was far stronger in Q4 of last year than it has been since. And yet, we are seeing a lot more pre-employment queries than we did last year.”

Vise said he infers this data shows that not only are drivers becoming more challenging to recruit, but they are also becoming harder to keep. “We saw some weakening of turnover during the early period of the pandemic,” he explained. “But we’re back to very high levels. Retention is important in this metric because turnover would drive the number of pre-employment queries—at least as much and probably more so—than the growth in employment does.”

With some fleets offering aggressive driver pay packages and large sign-on bonuses, “higher turnover isn’t just a natural consequence of this activity—it’s frankly built into the very business model of a truckload carriage as carriers fight each other for drivers.”

Drivers chasing bonuses and hopping from one fleet to another contributes to the capacity crunch and productivity challenges because of lost time during transitions, Vise said. “This final point could be one reason why pre-employment queries seem stronger than payroll job changes,” he added.

While driver turnover is a factor, Vise said it’s not the most significant factor. “After all, high turnover is sort of built into the fabric of the trucking industry.”

However, since the pandemic began nearly 20 months ago, the U.S. has seen a large number of people exit the labor market, Eric Starks, FTR’s chairman and CEO, said. “This is creating some structural problems. This is a big deal, and it’s going to continue to drain the markets as we go forward. You should not have an expectation that the labor markets are going to be freed up relatively quickly.” 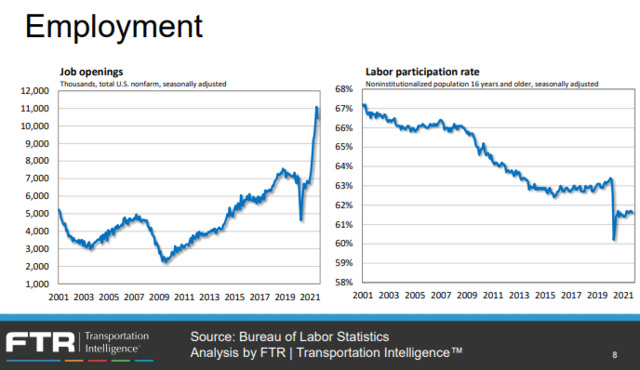 This is creating a smaller labor pool for trucking. Some of that has to do with retirements, as truck drivers this century have skewed older than the general workforce, Vise noted. It also has to do with reduced CDL training and licensing during last year. “But according to DOT, we have fully recovered from last year and are actually running ahead of 2019,” he said.

Traditional truck drivers are shifting to other industries, such as parcel and local delivery, warehousing and storage, and home improvement stores, Vise said. “All of those have fully recovered and then some. That implies they are drawing workers from other segments. Local delivery is especially likely to be a competitor because fundamentally it’s the same job, but it’s free from federal regulation.”

Vise said there is also an employment shift from larger fleets to startups. “Those startups are operating in the spot market and through transactions with brokers,” he said. “We estimate that this has resulted in a shift of about 3% of market share to carriers with 100 or fewer trucks from carriers with more than that.”

FTR estimates that these newer, smaller fleets granted operating authority since July 2020 now employ about 185,000 drivers. And about 72% of the new carriers only employ one driver, Vise said. “Those are almost certainly not included in payroll employment figures,” he said. “That one reason why I say that total driver employment may very well be ahead of where it was before the pandemic. But so is freight volume—so we would need more drivers.”

If and when there is “an inflection on spot rates,” it could tighten the margins for these smaller carriers and drive the drivers “back to the security of the larger carriers,” Vise said. “And that would have something of a snowball effect to soften the spot market further.”