Four major updates to hours-of-service rules for commercial drivers take effect on Sept. 29, changing how long-haul drivers are required to take breaks and extending the distance short-haul drivers can travel in a day.

In just over a month — at 12:01 a.m. EDT on Tuesday, Sept. 29 — revised hours-of-service rules go into effect for commercial drivers across the country. The new rules create more flexibility for drivers while keeping a focus on highway safety, according to Joseph DeLorenzo, the acting associate administrator for enforcement at the Federal Motor Carrier Safety Administration.

The changes cover four main areas that loosen restrictions for the short-haul exception, adverse driving conditions, 30-minute break, and the sleeper berth provision. “All of those were provisions that we have heard about and had lots of discussions with the industry,” DeLorenzo said during a presentation at the virtual Trimble in.sight user conference on Aug. 26. “So this rule was really focused on the input that we received from everyone that’s been involved in the process from the drivers to the carriers, (agricultural) groups and others.” 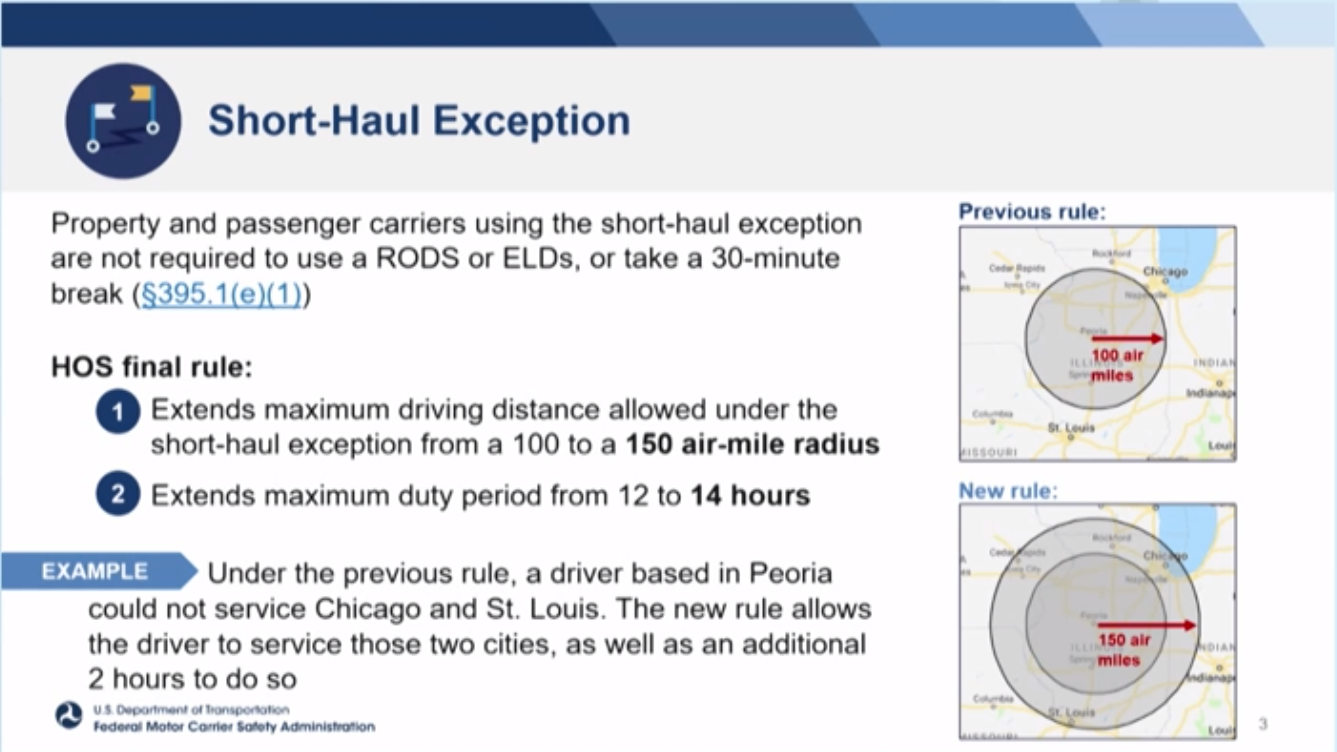 Regarding the time record, DeLorenzo said it is “not as much an hours-of-service exception as it is an exception from creating that record of duty status.” The motor carrier still has to record the driver’s time in, time out, and total hours per day, which must also include how many hours the driver has worked for the previous seven days. Those records are required to be kept by the carrier for six months. They are not required to be held on the vehicle, but law enforcement can request a copy of the records from the carrier if a driver is pulled over.

Drivers who exceed these exceptions, such as driving too far or too many hours, must complete a regular log — if it only happens eight or fewer days within the last 30 days — or use an electronic logging device (ELD) — if the exceptions are not met more than eight days within the past 30. 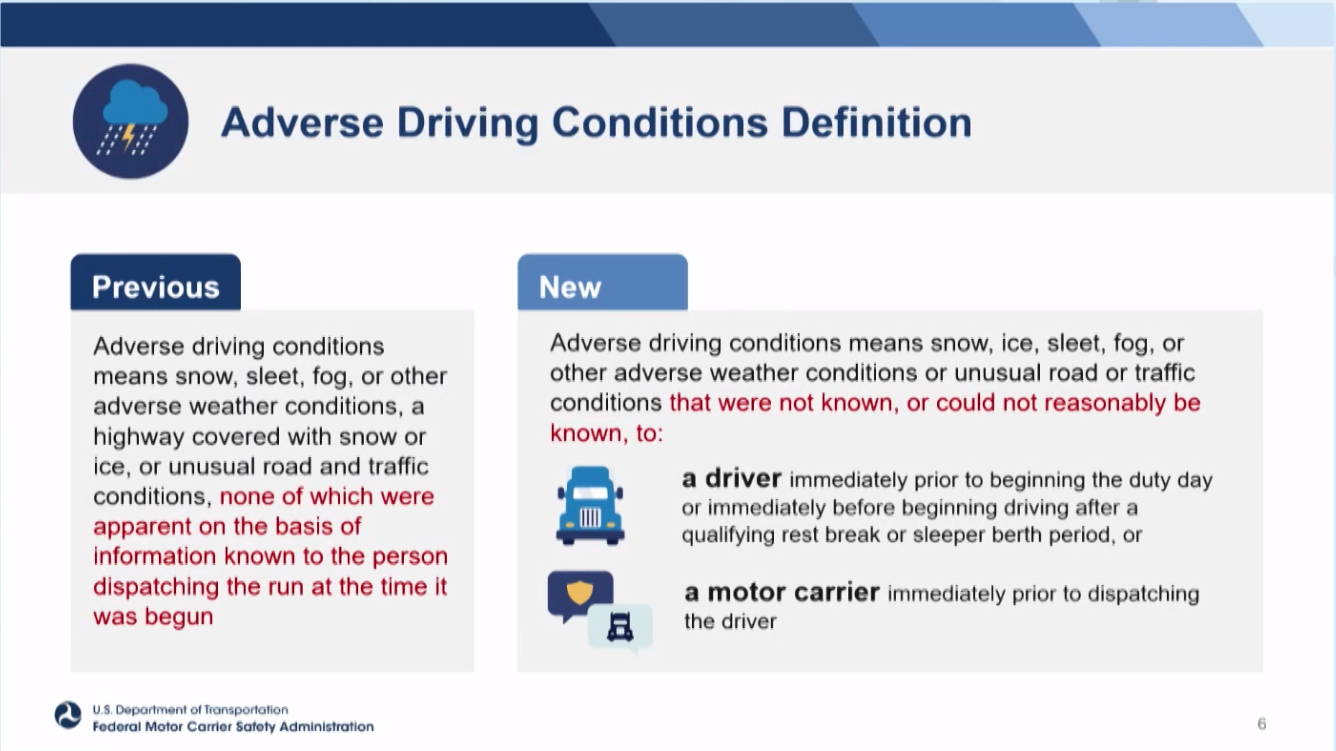 “If they’re taking a sleeper berth period, or they’re starting their day, check the traffic, everything looks good, and off they go and next thing they know they’re stuck in a traffic jam because there was an accident, that definitely would meet the definition of adverse driving condition,” DeLorenzo explained. The updated rule “really tries to put it in the hands of the driver and really tried to focus on the fact that the driver has to make this assessment after the last qualifying break — as opposed to the beginning of the trip, which the earlier definition had set.” 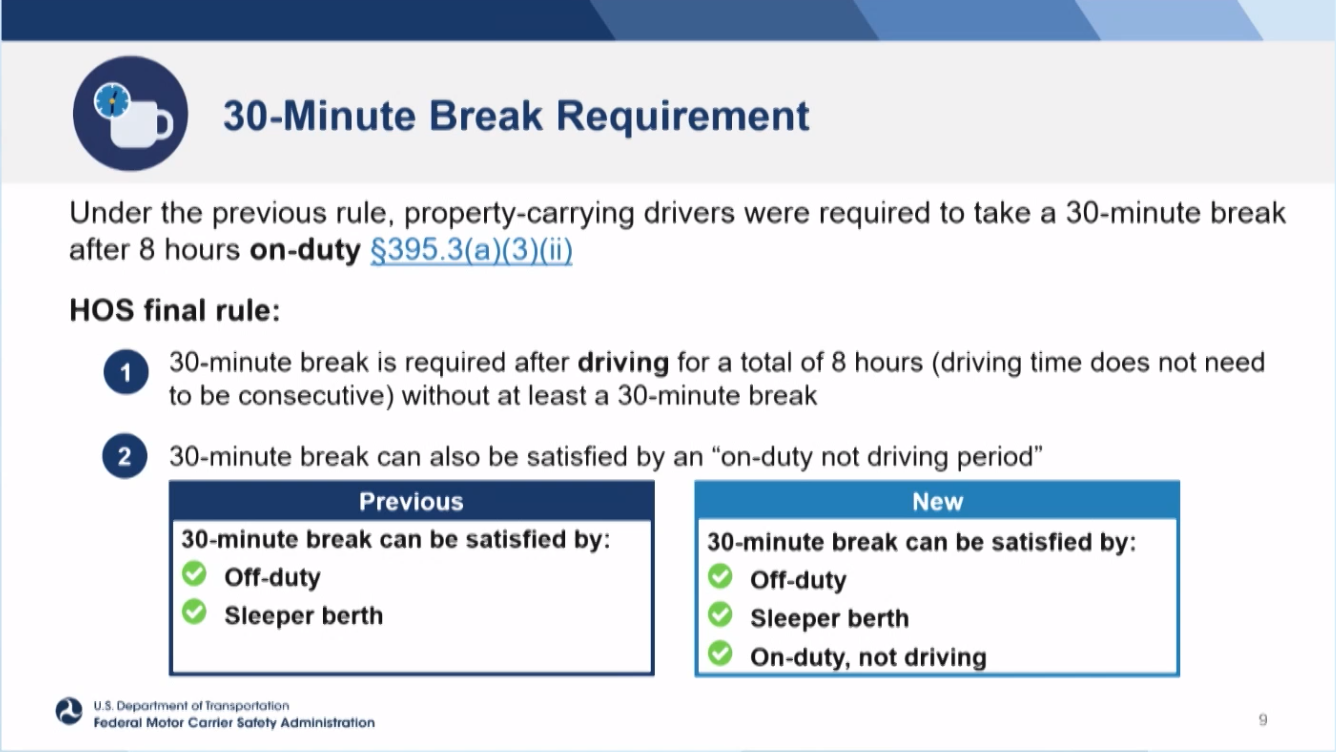 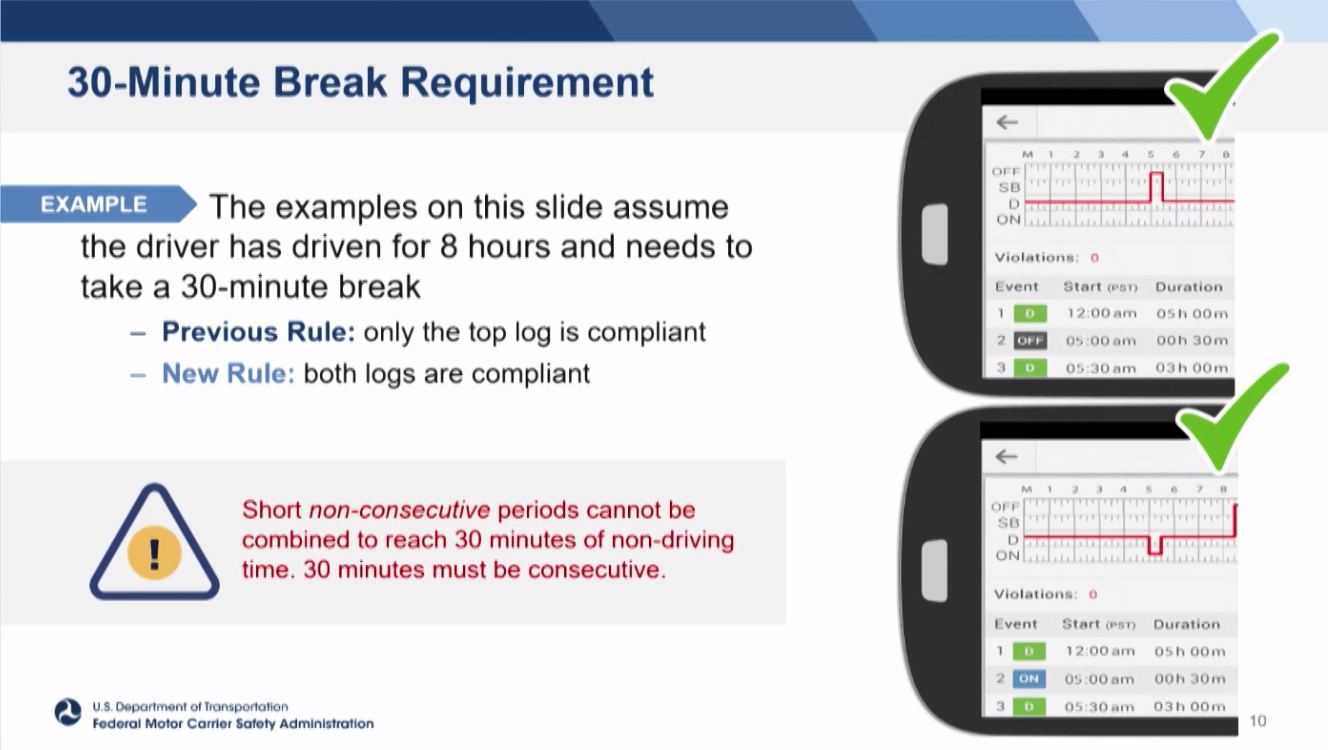 The current rule required the 30-minute break to be taken while off-duty or in the sleeper berth. “Now it allows any duty status other than drive time, so off-duty sleeper berth, on duty but not driving, or some combination thereof, as long as it’s 30 minutes together,” DeLorenzo said.

He said drivers can now count their 30-minute breaks when they stop to refuel and get some food, for example, or even while waiting at a shipper. This can also be folded into the new sleeper-berth provision if done correctly. 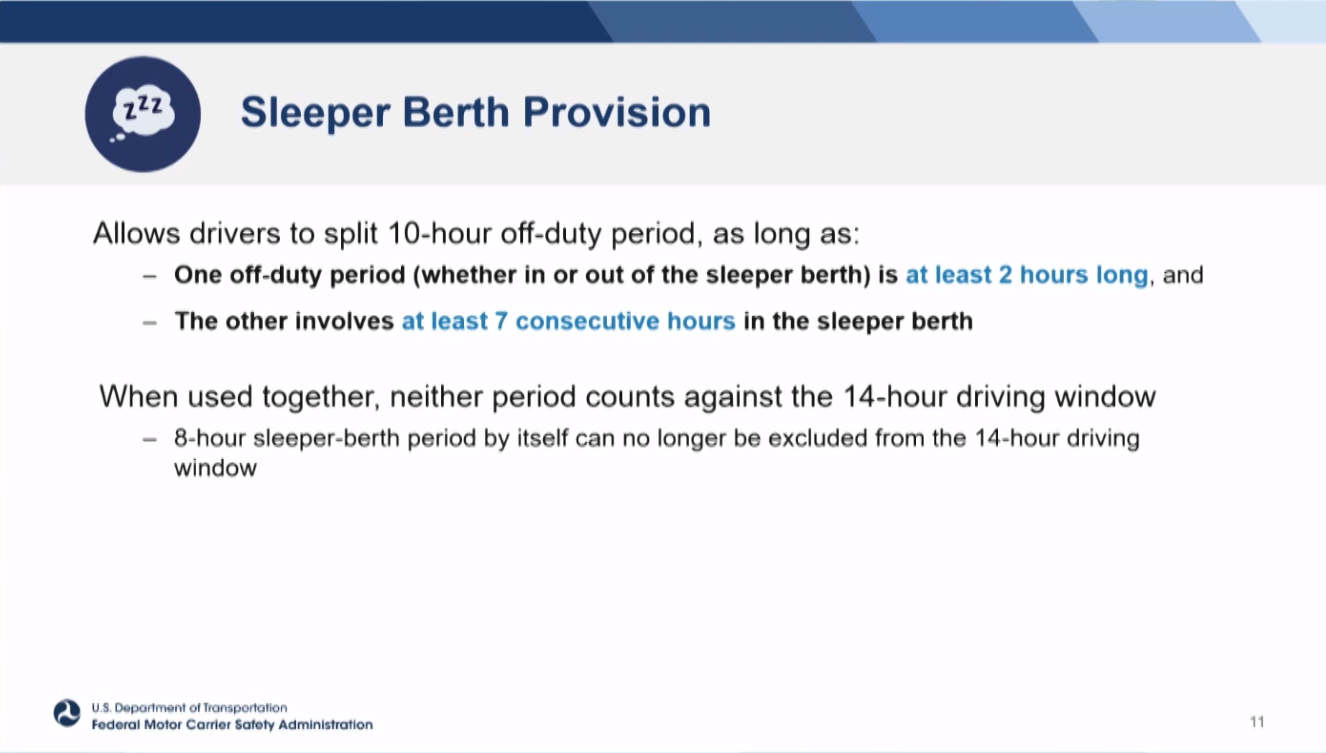 DeLorenzo described the new sleeper-berth provision as “probably the most significant and maybe the most complicated” of the HOS changes coming on Sept. 29.” What this sleeper berth provision does it allows a driver to split the required 10 hours off as long as one of those periods is at least two hours, the other one is at least seven hours, and they total 10,” he explained. 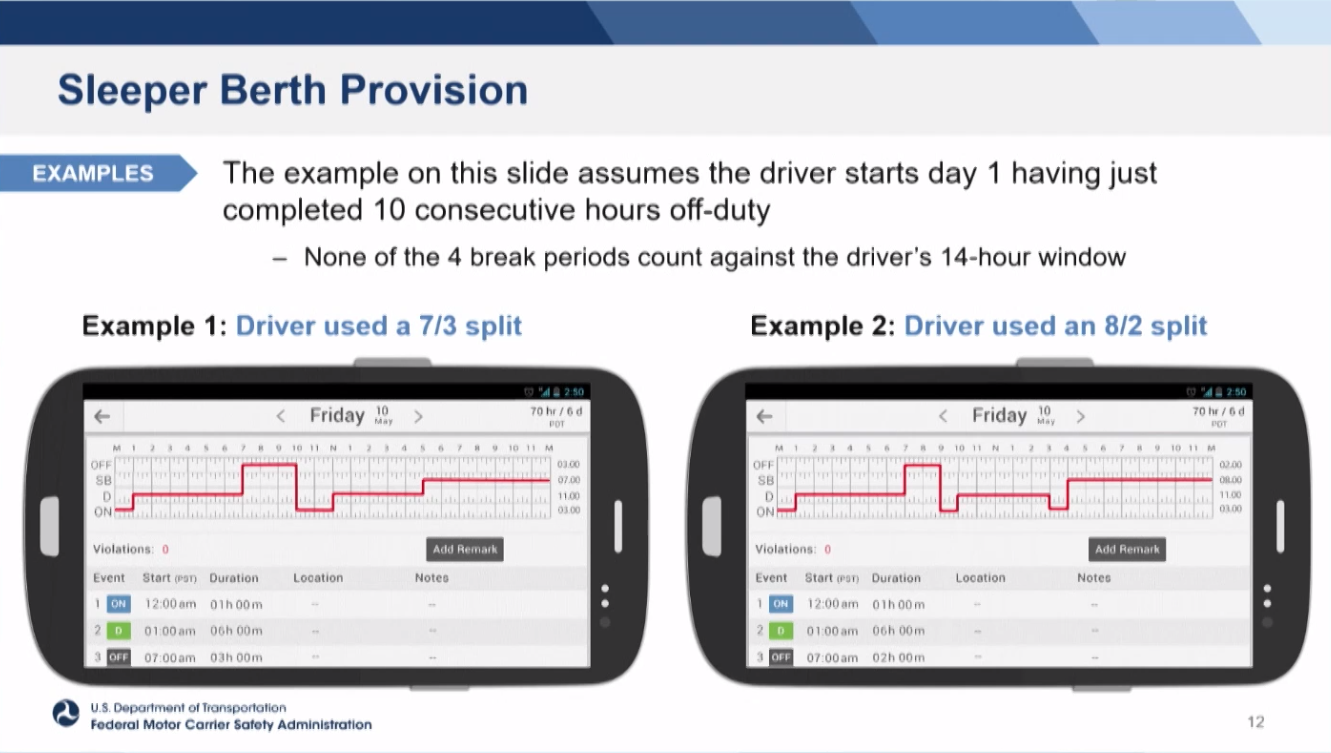 The FMCSA official offered up a basic example of how the new sleeper-berth provision will work with a driver using a 7/3 split. Assuming the driver starts Day 1 after a 10-hour off-duty period at midnight. The driver is on-duty for an hour before driving from 1 to 7 a.m., which is six hours of drive time (out of seven on-duty hours). The driver then takes three hours of off-duty time from 7 to 10 a.m., which covers the two-hour minimum off duty time. The driver logs back on-duty for two hours, from 10 a.m. to noon,  before driving five hours from noon to 5 p.m. At that hour, driver then spends seven hours (from 5 p.m. to midnight) in the sleeper.

“The first thing we do when we look at this example is we say, OK, we had two qualifying periods: we had the three (hour break) and the seven (hour break) and we the total 10. So the splits work,” DeLorenzo said, adding that when done right neither off-duty period counts against the 14-hour clock. “That’s a good thing too.”

But how do you calculate the time? “The easiest way to do this — and everybody does it a little bit different — but the calculation period really starts at midnight,” DeLorenzo continued. “Another way to look at it is that you look on either side of the qualifying splits. In this particular example, the way that I do this calculation is I look on the left and the right of that three hour period: On the left, we have six hours of driving, and on the right, we have five, so we total 11. So that’s great. We’re totally in compliance with the 11-hour rule. And when we look at the 14, it’s same thing: You’ve got seven hours on the left, you got seven hours on the right, you got 14 hours of total on-duty time. Therefore, we definitely are in compliance, everything is looking good and then we can move forward.”

With splits such as this example, DeLorenzo adds, it becomes less likely a driver would need to take a 30-minute break because the off-duty and on-duty-non-driving periods satisfy that 30-minute break requirement.

These changes to the HOS rules do not affect the weekly limitations under the 60/70-hour rule concerning the maximum number of on-duty hours a driver may accumulate before his or her driving is prohibited, according to an FMCSA Federal Register filing in June.

“The basic framework, excluding recordkeeping requirements, consists of an 11-hour limit on driving time following 10 consecutive hours off-duty and a prohibition on driving after an individual has accumulated 14-hours of on-duty time during a work shift,” reads the FMCSA filing. “That framework also prohibits drivers from driving after accumulating either 60 or 70 hours of on-duty time in 7 or 8 days respectively but permits them to restart their 60- or 70-hour “clock” by taking at least 34 consecutive hours off duty.”

The HOS rules officially take effect on Sept. 29 at 12:01 a.m. EDT, which means they will go into effect at 9:01 p.m. PDT on Sept. 28. DeLorenzo said this is to make the rule changes the same across the country. The FMCSA also offers an explainer on its website.