ATA economist Bob Costello believes the pandemic recession has ended, but not before it changed the future U.S. economic landscape by reshaping consumer habits in a way that has benefited the trucking industry — unlike past recessions that hampered it.

“The recession is likely over.”

Bob Costello, the American Trucking Associations’ (ATA) chief economist, delivered this promising, unofficial news to virtual attendants of the 2020 McLeod Software User Conference during a Sept. 30 presentation on the economy.

While the recession might be over, the U.S. economic landscape might forever be changed as the COVID-19 pandemic is reshaping consumer habits in a way that has benefited the trucking industry — unlike past recessions that hampered it.

The U.S. economy has seen two consecutive quarters of negative GDP growth in 2020, which Costello said is the unofficial definition of a recession. The official declaration of recession is made by the National Bureau of Economic Research, a group of economists who decide when economic expansions or contractions officially began and end. A recession is based on four main indicators: industrial production, business sales, personal income, and nonfarm payrolls.

Costello said all of these indicators dropped drastically in the spring but are on the upswing this fall. “My point is the recession, in all likelihood — even though this group has not come out and officially declared it — the recession is likely over,” he said before adding: “The question then becomes, are we headed on a track where we don’t fall back into a double-dip? As of now, I think that’s the case.”

But what happens in the coming months will determine this. The more than a decade’s long economic expansion, the longest in U.S. history, “ended not because of an economic crisis but because of a health crisis,” Costello said. “And to fully get back to where we were, as an economy, we have to have some sort of health solution.”

The health solution, he noted, is not only about a vaccine for COVID-19 — the virus that has led to more than 200,000 American deaths in 2020 — but also how the world finds a comprehensive solution to care for the sick. “Once we get a worldwide health solution to this problem, we can start to get back in all facets to where we were in the economy,” Costello said.

After a 5% decrease in real GDP during the first quarter of 2020, the U.S. saw a 31.7% drop in GDP during the second quarter. Before the nearly 32% drop during the spring quarter, the largest quarterly GDP decrease on record was a 10% drop in 1958 based on quarterly records that go back to 1947. That drop, which Costello called “unprecedented,” leads to “an unprecedented increase in the third quarter,” which he forecasts to be up nearly 30%. The ATA economist expects the 2020 fourth quarter, which began Oct. 1, to see a 2.5% GDP growth, followed by a 3.3% first quarter growth in 2021, which are both closer to long-run averages for the U.S. economy.

But because of such a staggering fall in the middle of 2020, Costello said it would be at least a year before the U.S. economy truly rebounds from the pandemic recession. “It’s going to take some time,” he said, adding that there is good news for the trucking industry, which is doing better than other sectors.

Typically, trucking is among the worst hit by recessions because fleet customers are affected the most. “Ironically, this time — despite being the worst drop in recession history, in the shortest amount of time — the parts of the economy that are performing better happen to be our customers in many respects, certainly on the consumer side,” Costello said.

McLeod Software founder and CEO Tom McLeod said he’s heard from many trucking customers who are having record years during the pandemic. Among the feedback he’s heard, is the fleets that were prepared with the right technology, such as automation, “have done really well during this period,” McLeod said during his User Conference opening remarks on Sept. 29.

The difference can be seen in how consumers are spending on goods versus services this year. “In normal times, we spend a lot more on services,” Costello said. “We usually spend about two-thirds of our money on services and one third on goods.”

While spending on both fell during the second quarter, goods consumption fell just 5% while services dropped 15% on an annualized basis, according to Costello. By the third quarter, goods consumption was higher than it had been at the start of the year. “You want to know why freight is good right now? Look at that line,” he noted, referring to the graph depicted above. “Whereas services are going to take all the way until 2022 to recover.

“When we go out and spend money on a service, sure there’s truck freight involved,” Costello continued, “but the services are a much less truck intensive industry as compared with goods. When we go out to buy a good, there’s a lot of truck movements associated with that even on an imported good. So that’s where we have benefited this time.”

With people doing more social distancing and spending less money on services this year, it has freed up money for goods. “As a personal example, we haven’t gone on vacation this year,” Costello said. “But we’ve done some things around the house. We bought things for around the house because we saved money not going on vacation. I think a lot of people are in that boat.”

But he cautioned not to expect this freight growth to continue at this rate. It likely won’t fall, Costello said, but it will flatten. “So it’s going to remain elevated — but not grow at the same rate. That means freight is still going to be good, but it’s not going to grow as much.”

Another reason goods consumption is expected to level off is that there is less money in the economy than a few months ago, Costello said. While unemployment numbers spiked beyond previous records set during the Great Depression and Great Recession, the government propped things up with stimulus checks and an extra $600 a week for the unemployed, which pumped $15 billion a week into the economy.

That federal assistance ended this summer as Congress and the White House still quibble over future COVID stimulus bills. “There’s less money in the economy today than there was a few months ago in terms of this extra money,” Costello noted. “That’s another reason why you saw the slope of that line sort of flattening out for goods.” 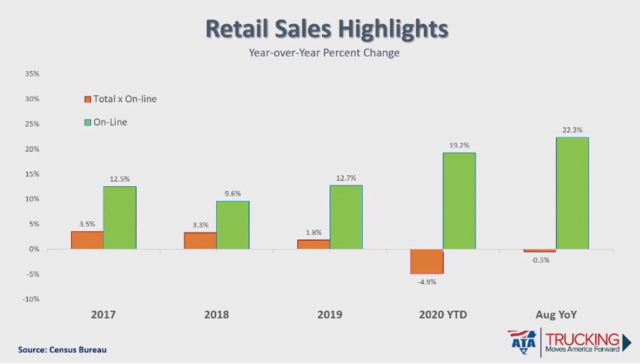 Unsurprisingly, a pandemic that has pushed Americans to stay home more and socially distance has accelerated the growth of e-commerce, which had already been growing faster than brick-and-mortar retail over the past few years. E-commerce growth, year-over-year, has outpaced other retail sales significantly since at least 2017. But 2020, Costello forecasts, will be the first year where non-online sales decrease year-over-year (he expects by almost 5%) while e-commerce is expected to jump by nearly 20% this year and grow even more in 2021.

Another point of retail interest is the resurgence of grocery stores. “Back in 2015, for the first time in our history, we saw that we were spending more at restaurants buying food and beverages than we were at grocery stores,” Costello said. “And that flipped during the pandemic.” Through August, restaurant sales are down 20.5% while grocery sales are up nearly 12% year-over-year, he notes.

These changes in consumer behaviors are creating opportunities, McLeod noted earlier in the week. “It is in times of disruptive events that the biggest opportunities appear,” he said. “I hope that you’ll take advantage of the opportunities and not see these events just as problems but as things you can take advantage of. The trend toward e-commerce has likely been accelerated in a way during this pandemic that it’s not going to be reversed.”