After an unpredictable second quarter, truckloads are on the rise, pointing to gains over the next 12 months. But rising coronavirus cases across the South could ‘paralyze’ the economy, according to FTR.

“Our latest forecast is a decline in loadings of about 5.7% this year, and that’s about a percentage point better than the outlook that we published a month earlier,” said Avery Vise, the FTR Transportation Intelligence vice president of trucking, during FTR’s monthly State of Freight webinar on July 9. 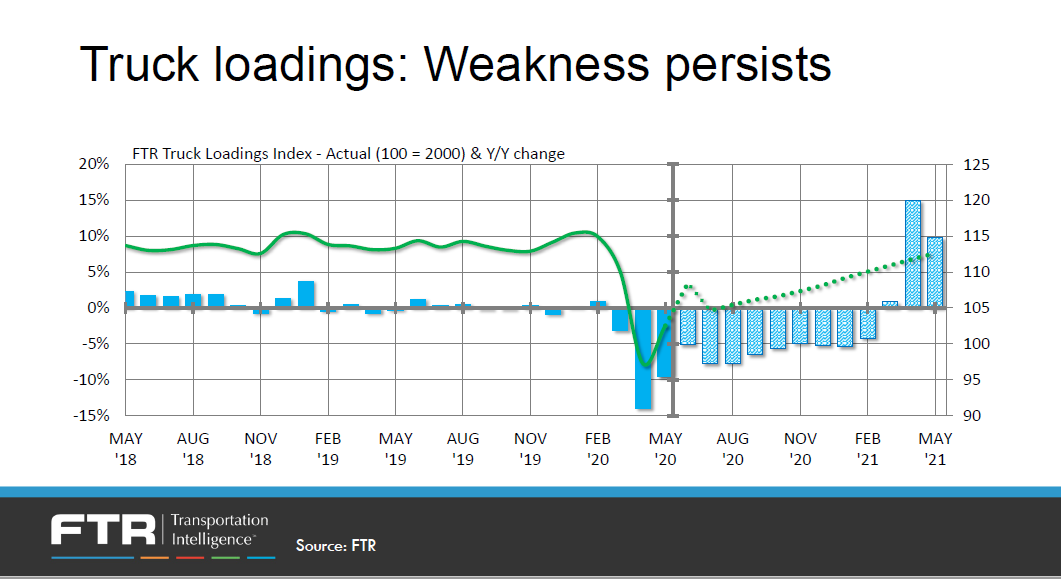 Flatbed has improved the most since the COVID-19 pandemic first rocked the U.S. economy in March, Vise said, adding there are positive signs that housing starts are regaining strength this summer. FTR forecasts a 6% truck freight growth for 2021, which would be strong year-over-year growth — but growth from a low base. “We do not expect volume to recover to the pre-crisis levels until the second half of next year,” Vise warned. “And that’s not even taking into account whatever growth we might have seen over where we were in 2019 and early 2020.”

Turning to the present, Vise noted that real-time trucking indicators are strong. According to Truckstop.com, total load availability the week before the Independence Day holiday weekend was the highest in nearly two years. “Refrigerated and flatbed spot loads were not that strong — but they were among the best levels of the year and were higher than both last year’s levels and the five-year average,” he added. 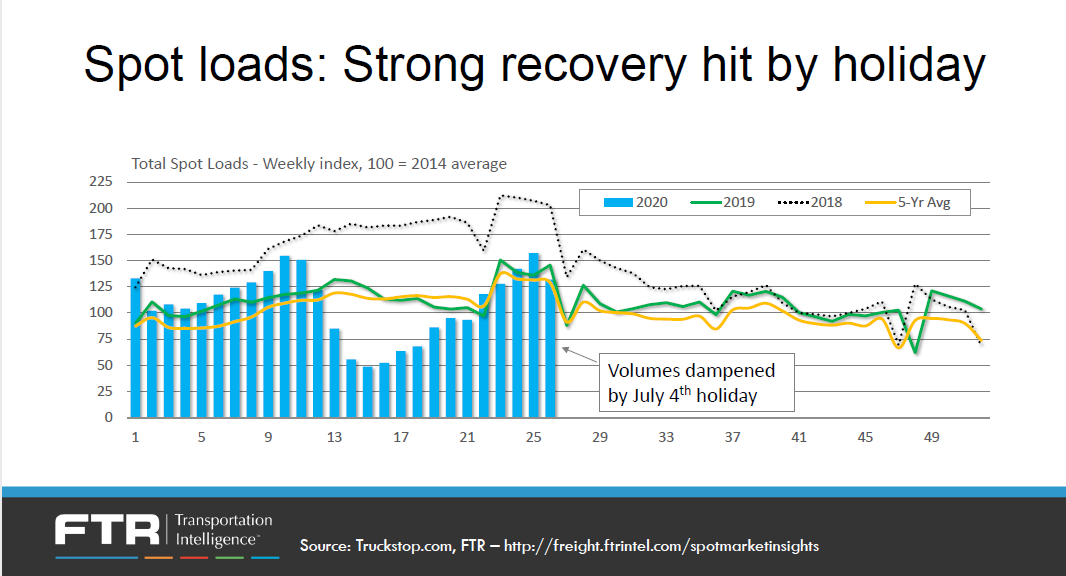 Because of the holiday, which took loads down a bit, Vise said it would take another couple of weeks to know if the market strength is continuing. FTR is also watching trucking payroll numbers, which continue to be down. That’s added some disruption to the market and supply chains, which is why Vise is hesitant to declare the industry is on the verge of a robust third quarter.

FTR’s data shows that active trucking utilization — the share of trucks that have drivers engaged in hauling freight — has bottomed out. “But we aren’t necessarily particularly strong yet,” Vise cautioned. “There still seems to be a reasonable amount of capacity to handle the freight demand that we’re getting. At this stage, we would anticipate a steady improvement over the course of the next year. But there are a lot of unknowns still in both demand and capacity — especially with the uncertainty over the trajectory of the pandemic itself.” 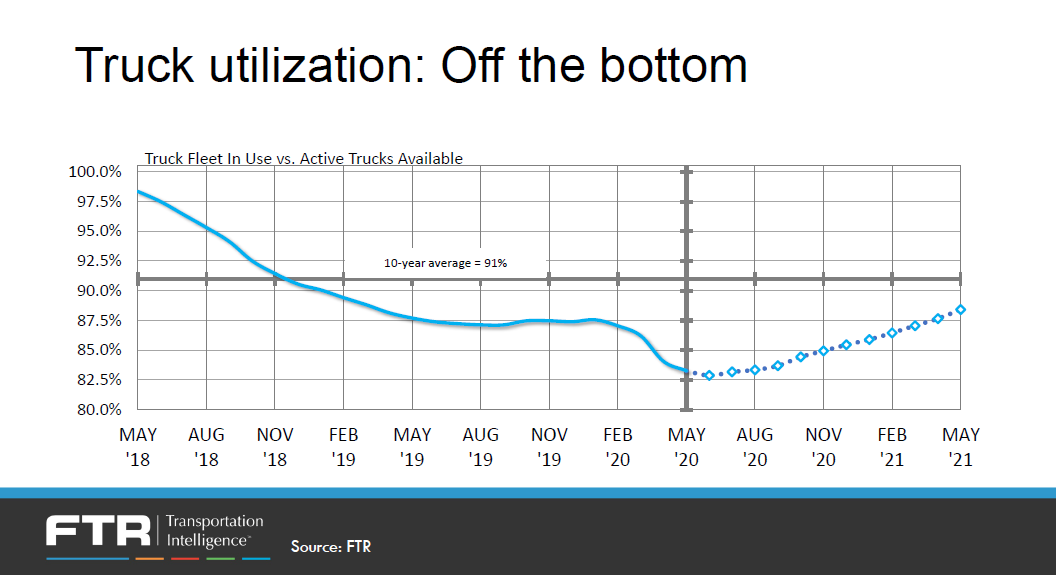 Eric Starks, FTR chairman and CEO, has been working to understand the short- and long-term impact of COVID-19. While fatalities from the disease have decreased lately, the infection rate is on the rise. This has led to internal FTR debates: “Should we be looking at fatalities because they have a bigger impact on the broader economy or is it the number of cases?” he explained. “And we’re trying to understand what those impacts are.”

Starks believes the number of COVID-19 cases — which topped 60,000 new cases in a day for the first time on July 8 — is driving the economy. “I believe that this number is going to have the biggest impact on economic activity,” he predicted. 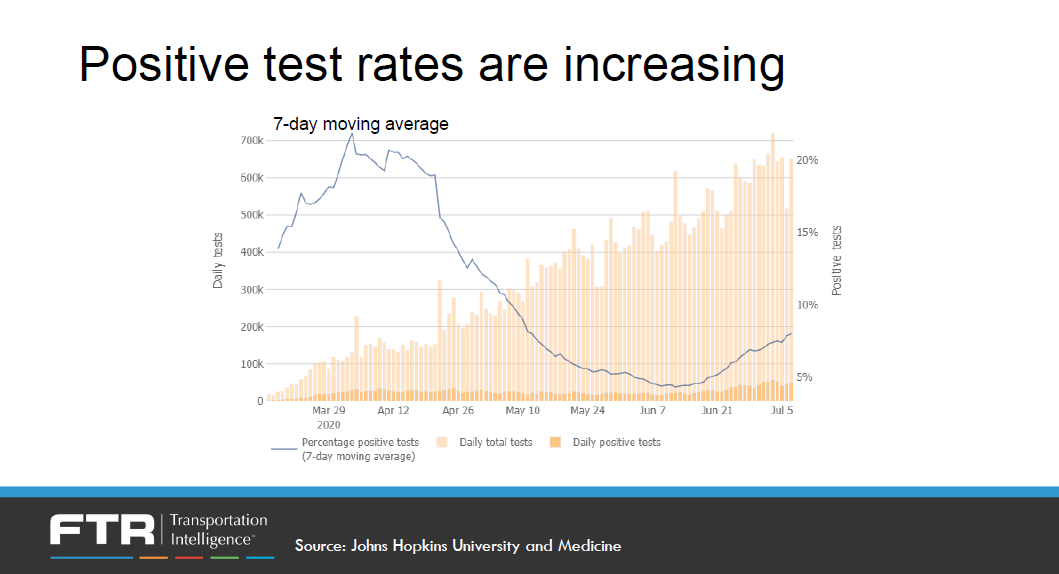 California, Florida and Texas — along with other Southern regions — are seeing spikes in new COVID-19 cases, leading to more hospitalizations. Starks said these spikes will impact those markets, which all contribute a significant portion to the national GDP. “I think these regional disruptions are going to be very, very problematic,” he said. “And this makes it hard for the economy to really get moving. When we see the number of cases here, it is at a point where we could potentially become paralyzed as a nation.”

While acknowledging the political polarization of virus viewpoints, Starks said he is trying to stay focused on the data. Instead of looking just at the number of virus cases, which were expected to rise with more testing, the FTR CEO is focusing on the positivity rate of those tests. That rate has “radically increased,” he pointed out. “So we’ve almost tripled the positive test rates that we’d seen before as it’s moved closer and closer to that 10% range. That is very problematic for the industry and the overall economy… It’s not just a testing phenomenon.” 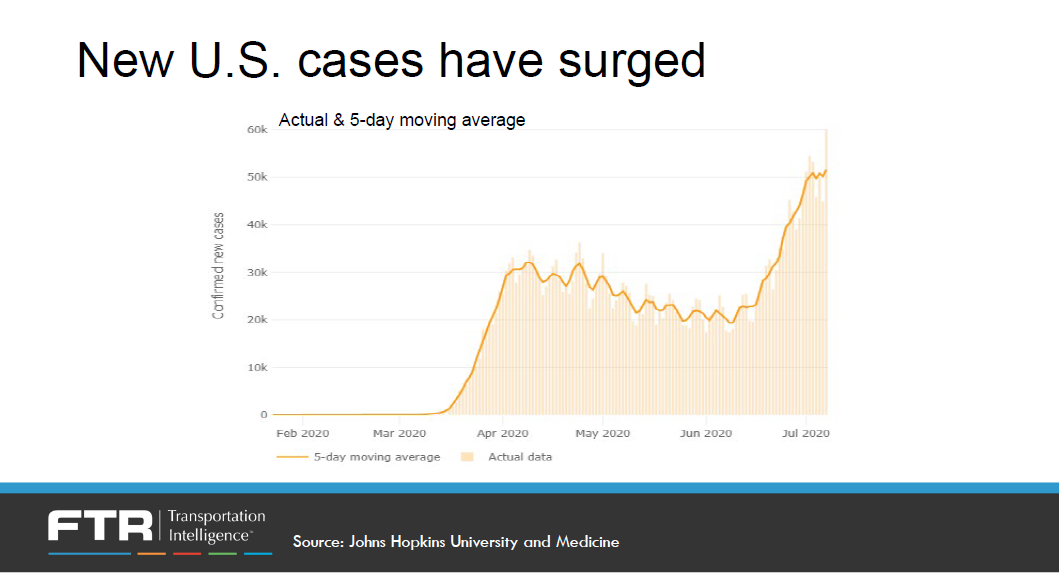 Starks believes that Congress — and the Trump administration — will have to take more action if the positive rate continues to increase. The CARES Act, which has provided a federal $600-a-week supplement to unemployed workers, ends this month. There are currently 31.7 million Americans receiving this benefit. If Washington allows those payments to end, it would equate to removing about $76 billion in cash per month from the economy, Vise added.

That money goes not only to people who get regular unemployment benefits, Vise pointed out, but also to gig unemployment assistance programs, which include sole proprietors and independent contractors, such as trucking owner-operators.